A Good Life All the Way: A Playlist, Part II 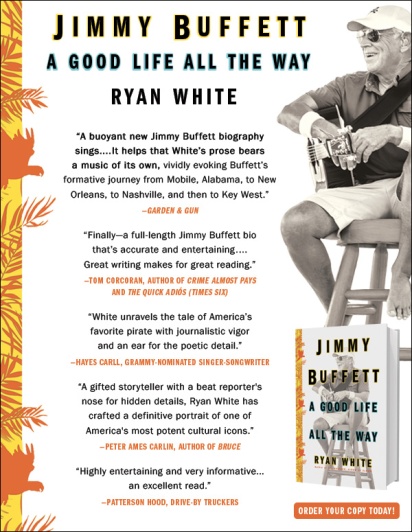 When we ended Playlist the First, “Margaritaville” was about to be released. That covers roughly the first half of Jimmy Buffett: A Good Life All the Way, out May 9 from Touchstone.

In the next week or two I’ll knock out some Buffett playlists, but these are Buffett free. These are the songs you’ll find tucked into the book and as we pick things up, we meet the songs that were atop the charts as “Margaritaville” made its climb into the top 10 in 1977.

Looking back at the book last night, I’ll admit to perhaps being a little hard on Glen Campbell’s cover of “Southern Nights,” but I stand by its “Kermit and Fozzy on the road” vibe. Especially compared to the magic of Mr. Toussaint’s original, and I’ll say here again that one of the absolute life highlights that resulted from this book was getting to meet and talk with Mr. Toussaint. It was an hour I’ll cherish forever and provided, I think, the right end to the book.

Back to the playlist. Looking at it now, what we see is the great shift in trends that happened as the eighties gave way to the nineties and then where Buffett turned toward books and bars and business. Until one day, to the surprise of many, he was the genre he’d never been able to find.

There’s a great Todd Snider quote in the book, and I won’t give it away. But he and I were hanging out in the sun on the deck of a floating home here in Portland when he drew a line from Margaritaville Records straight to country music’s embrace of bars, beaches, boats and serious drinking songs.

It all makes for some harsh transitions, but some fun ones, too. May it get you through this Wednesday.