“You give them the best, and the world takes care of the rest” (Or: Thanks again) 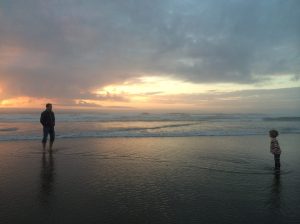 I don’t know anyone who doesn’t love a good sunset, and if I had to pick one day from 2014 to take with me into the new year, it’d be a perfect evening at the beach with a bonfire, and great friends and family. If I had to take two days, I’d let the day Springsteen: Album by Album first arrived arm wrestle with the release party at Mississippi Pizza. Oh, and Harbaugh. So much Harbaugh. Happy Harbaugh, Harbaughs!

I keep reading about how terrible 2014 was. I’m pretty sure a year ago I was reading about bad 2013 was. And 2012 before that. All years have bad. Hopefully we all found some good.

Bruce Springsteen told a story once about a conversation he’d had with a friend. Bruce was worried his kids wouldn’t know struggle, or work, or worry. His fame and his fortune would inoculate them to all of that. “You give them the best,” his friend said, “and the world will take care of the rest.”

It will and it does.

So that was a year untethered from an office, and it worked out. It was pretty good. We still got the house. My kid didn’t miss a meal. That’s a win.

A quick thank you to everyone who bought the book, and to everyone who took time to talk with me about it. I’ve never rolled out a book before, but this one seems to have gone fantastically well and a lot of people have said many nice things.

With some luck and some work, I hope to be kicking a new project into gear next year. On that note, a big thank you to the patient and calm Zachary Schisgal at the Schisgal Agency.

Thank you to Tim Swanson at the Sacramento Bee who gave a home to so many of my words about music in 2014. And the same to Ned Lannamann here in Portland at the Mercury. Ned was goodly enough to let me write about two of my favorite records this year: Metamodern Sounds in Country Music by Sturgill Simpson, and Colfax by the Delines. I also dug this story of Jimmy Buffett and the old Euphoria Tavern.

The Wall Street Journal and Sports Illustrated gave me reason to work out some atrophied sportswriting muscles and I hope to do more of that. If you’re prepping for the Rose Bowl, might I recommend my WSJ piece on the hulking incongruity in Eugene we call a metaphor?

The good folks at Backstreets were kind enough to publish an essay about what happens when you become a character in a Springsteen song while writing a book about Springsteen. Kinder still was the enthusiasm with which they helped push the the book.

Julia Silverman and the rest at Metro Parent here in Portland asked me to write about parenting, which is always fun and hopefully funny.

So here’s to 2014. Thanks for being there. Let’s do it again starting tomorrow.